During this decade, the Division and Area built upon its historic research strengths in such areas as building energy technologies, international energy analysis, technical support for appliance/equipment efficiency standards, battery research, indoor environment, and utility resource planning. Research activities increasingly focused on the impacts of climate change and need for resilient, reliability, and affordable energy infrastructures. 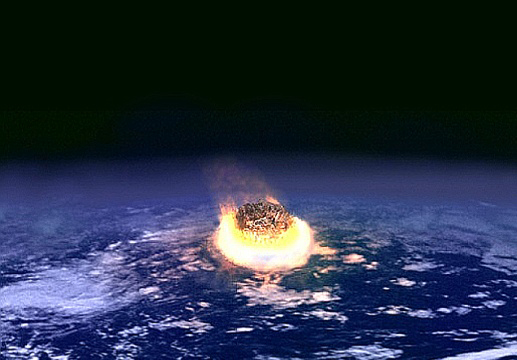 In an article in Science, an international panel of 41 experts declared that it was an asteroid, not volcanoes, that led to the demise of the dinosaurs. The theory was first put forth in 1980 by one of Berkeley Lab’s greatest scientists, the late Nobel laureate Luis Alvarez, and his son Walter.

Energy Efficient Economy celebrates its 30th anniversary; as part of the celebration, ACEEE gives Chuck Goldman a Special Award for Outstanding Contribution to the Energy Efficiency Field for his work and the contributions of staff in the Energy Analysis Department and Electricity Markets and Policy Group.

Art was appointed a distinguished scientist emeritus by Director Alivisatos. November - Republicans are majority in House

Gadgil announces that Kim Williams will work half time as head of phase 1 of the financial systems modernization project. Melissa Lunden is appointed assistant division director for Environmental Health and Safety.

2011 - Changes at the international and division level

April - Grether's appointment as a rehired retiree comes to an end

Grether had been associated with formation of the division starting in 1972, officially joined the division in 1974, was the deputy division director for 24 years, and continued an active role until this change.

Lab leadership and distinguished guests from the U.S. Department of Energy, the state of California, utilities and the building industry broke ground on the start of construction for the Facility for Low-Energy eXperiments on Buildings (FLEXLAB®).

Having two scientists in a row as secretary of energy is unprecedented. 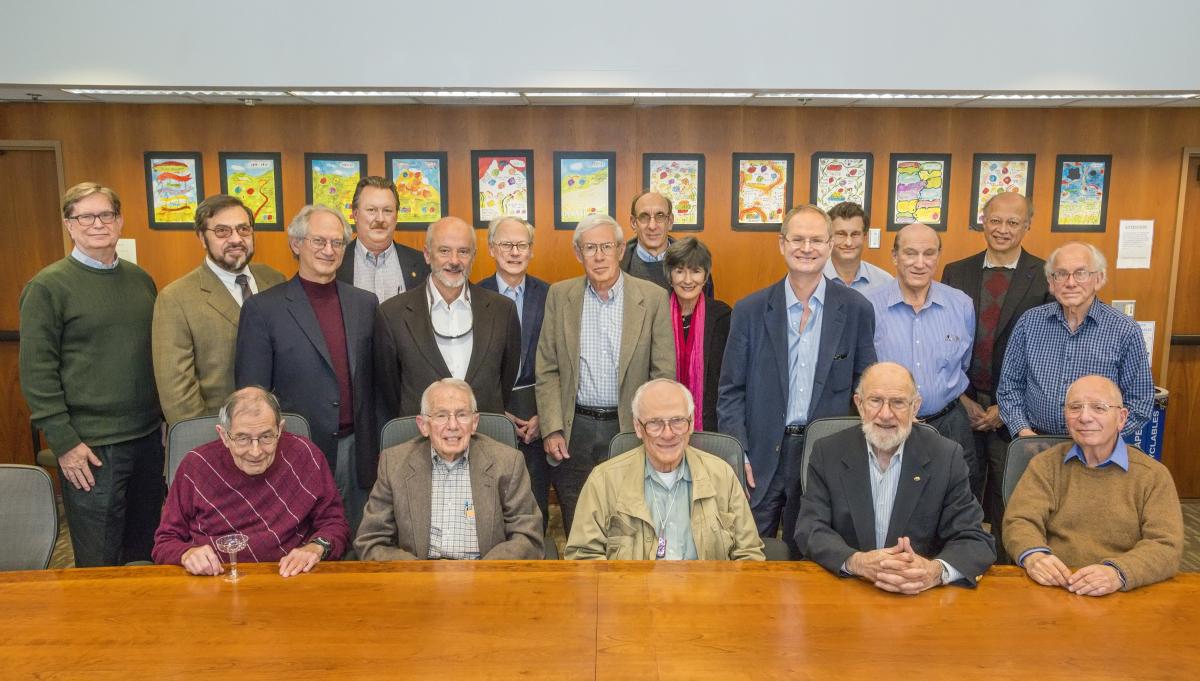 Celebration features three panels in the Building 50 Auditorium, followed by a reception. The first panel addresses the early years, with Sessler, Cairns, Budnitz, Rosenfeld an, Don Grether. Invited, but unable to serve on the panel were Jack Hollander and Mark Levine. February - Andy Sessler receives the Fermi Award, one of the most prestigious U.S. awards in science

Simmons was instrumental in the early days of the division, and was the acting deputy head when Bob Budnitz was the acting head.  Mel left the Lab in 1977. Read the obituary. 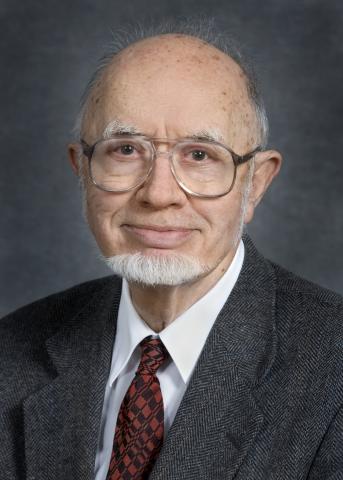 Among other accomplishments, Frank Asaro was part of the team that discovered the reason for the extinction of the dinosaurs. See June 6, 1980.

Ribbon-cutting ceremony for FLEXLAB®, a complex in and outside Building 90 proper that will serve to help industry use energy more efficiently in buildings. Originally launched in July as a pilot program with the code name "M37," Cyclotron Road provides a home for entrepreneurial technologists whose ideas are too challenging to pursue in a venture-backed startup, specifically in “hard tech” areas like advanced materials, chemistry, and physics.

Novakov founded the Atmospheric Aerosol Research Group at Berkeley Lab in 1972. The group spawned the now-mainstream field of research on carbonaceous aerosols. Read the obituary and a historical profile.

During the Year - Earth Sciences Division split into two divisions

Following a national search and acting on the recommendation of University of California President Janet Napolitano, with the concurrence of U.S. Secretary of Energy Ernest Moniz, the Board of Regents approved Michael Witherell’s appointment as the eighth director of Berkeley Lab. Witherell replaced Paul Alivisatos.

Stadler, who contributed to the design of the microgrid design tool DER-CAM, was among 106 researchers recognized by President Obama.

Art Rosenfeld, Berkeley Lab distinguished scientist emeritus, died January 27, 2017 at his home in Berkeley, California. He was 90. Rosenfeld was also known as California’s "godfather" of energy efficiency and has been credited with being personally responsible for billions of dollars in energy savings. 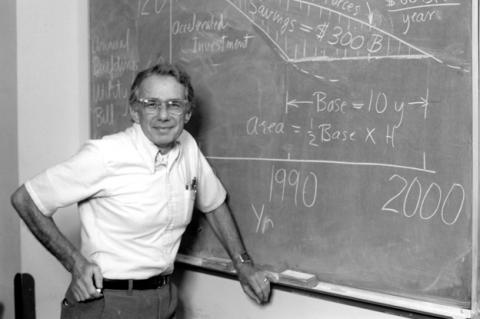 Tom Kirchstetter steps into Price's role as head of the Energy Analysis and Environmental Impacts Division, while Nan Zhou takes over as head of the International Energy Analysis Department. Later that summer, Price receives an award from the American Council on an Energy-Efficient Economy for her achievement and leadership in the field of industrial energy efficiency.

The group received the award for its innovative Benchmarking and Energy Saving Tool for Low-Carbon Cities (BEST Cities), which provides software for low-carbon planning that users can easily install and run.

Prior to this appointment, Prasher was director of the Energy Storage and Distributed Resources Division, where he led the Lab’s research on batteries, fuel cells, and grid modernization.

Pete Larsen and his team of researchers received a 2018 R&D 100 Award for eProject Builder, an online data management tool for water/energy retrofits used by customers in the institutional sector (e.g. Federal and state goverments). Cyclotron Road's Opus 12 was co-recipient of a Special Recognition Award.

Following an international search, Kostecki was appointed director of the Energy Storage and Distributed Resources Division in the Energy Technologies Area. 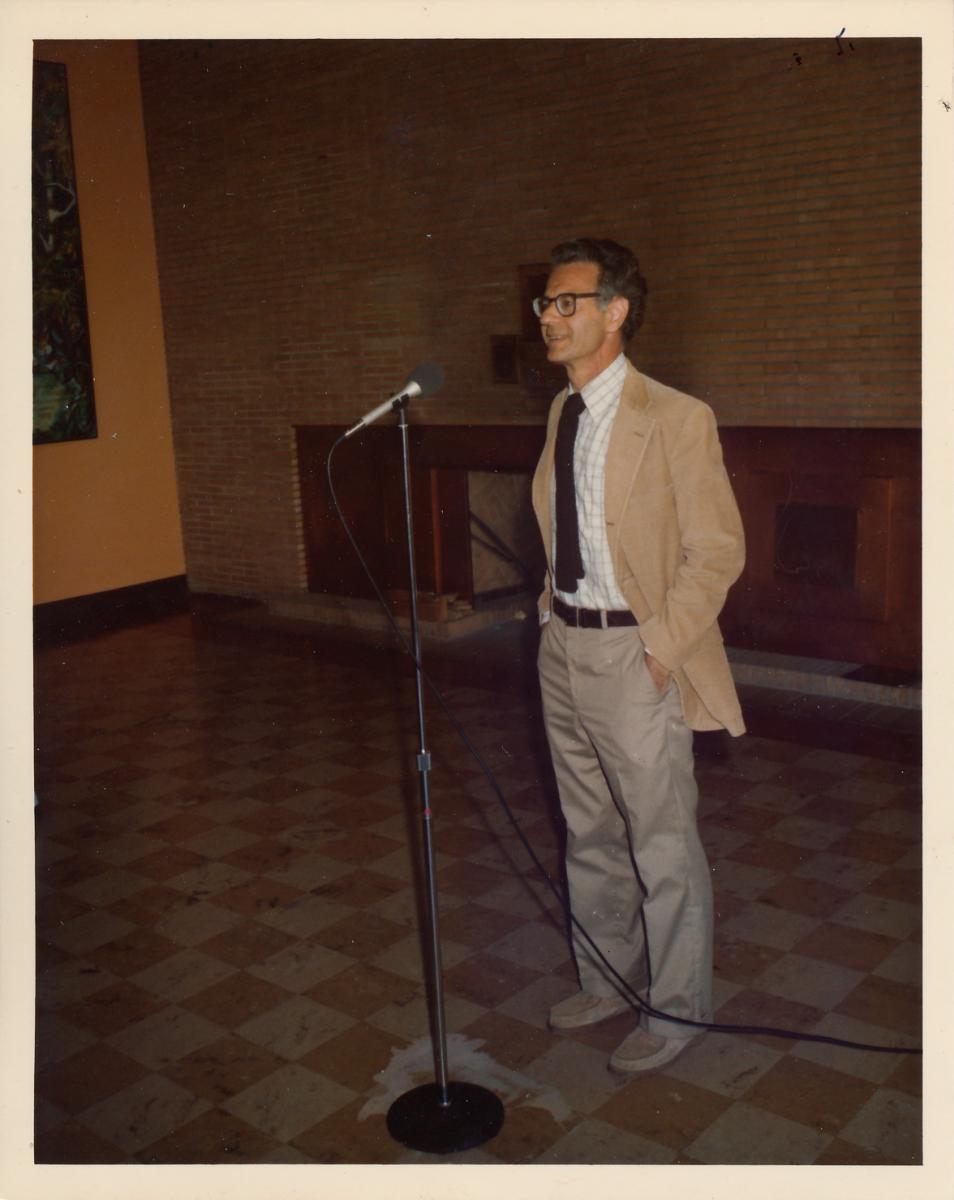 Hollander, a well-known nuclear scientist, led what has been described as a “tsunami” of growth in funded projects for the newly founded Energy & Environment Division (now Energy Technologies Area) in the 1970s. Read Grether's remembrance to learn more about Hollander's impact at Berkeley Lab.