Charles Shank became the fifth director of Berkeley Lab on September 1, 1989. He was the first director from outside the Lab, coming to the Lab after a 20-year career at AT&T Bell Laboratories.

Shank took over at a time when Berkeley Lab was moving away from its flagship enterprises of basic research in physics and chemistry and toward biomedicine, materials sciences, and energy efficiency research.

More than half a million people worldwide have access to clean drinking water, thanks to a fast and cheap purifier developed at Berkeley Lab. The device, called UV Waterworks, uses ultraviolet light to kill waterborne diseases such as dysentery — a major cause of child mortality in the developing world.

A new family of long-lasting rechargeable batteries is made possible when Berkeley Lab scientists invent a novel class of solid polymer cathodes that lead to development of long-life, safe batteries for electric vehicles.

The third leadership retreat is held at Dominican College in San Rafael. The theme is "Positioning the Division in a Time of Change."

1991 - "Energy" and "environment" return to the division name

Name changed back to Energy and Environment Division by Lab Director Charles Shank. Article has much information about the Division.

James Cole is hired as the director of the California Institute for Energy Efficiency following a national search.          ​ 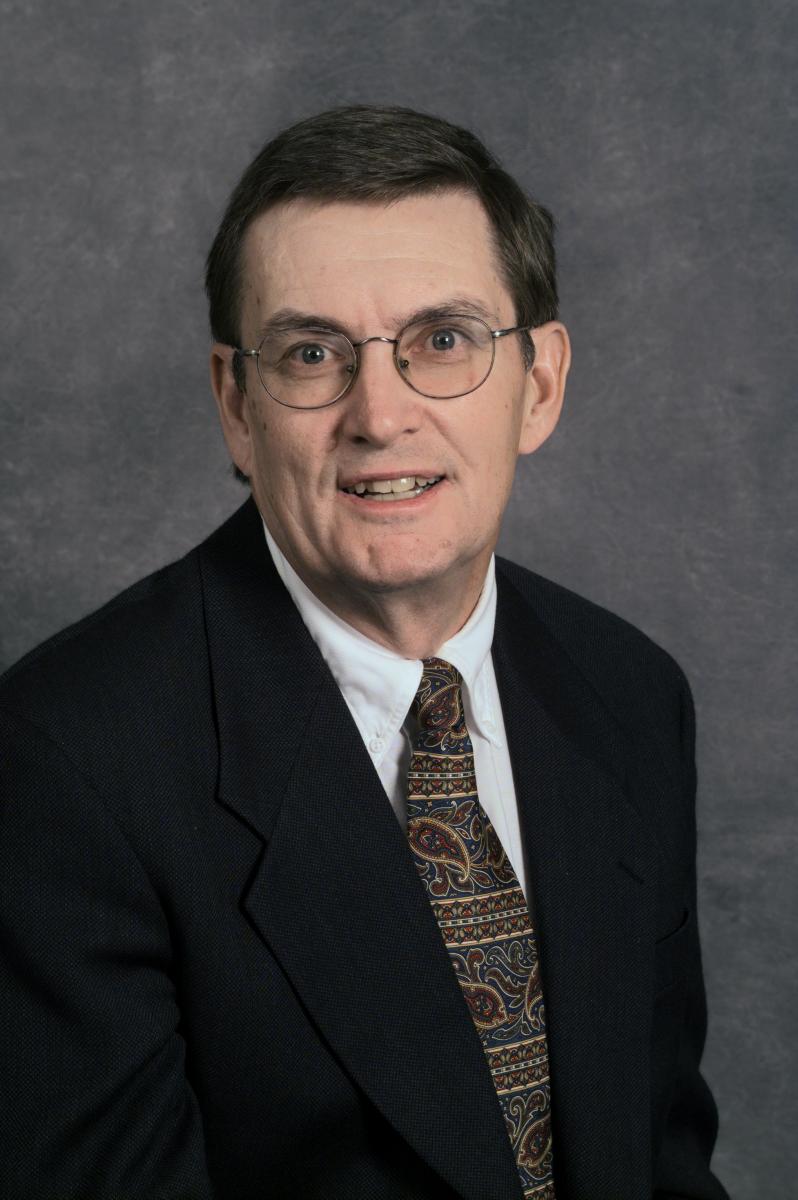 First round of the Voluntary Early Retirement Incentive Program. Mike Wahlig retires, thus ending the Building Energy Systems Program as such. The Simulation Research Group is put under Selkowitz in the Buildings Technology Program.

The Lab and the Divisions go through a Strategic Planning process.

The next-to-the-last Hollowell Lecture is given by Wallace S. Broecker from Columbia.

Joan Daisey appointed director of the Center for Atmospheric and Biospheric Effects of Technology, replacing Ron Ritschard, who retained his position as Deputy Leader of the Energy Analysis Department.

Cheryl Fragiadakis is appointed head of technology transfer after serving in an acting capacity since March.

Memo from Elton Cairns to Charles Shank proposing to establish a Washington, DC, office and to hire Steve Wiel as head of the office. Chris Payne, Aimee McKane and Paul Mathew were among staff at the Washington location. 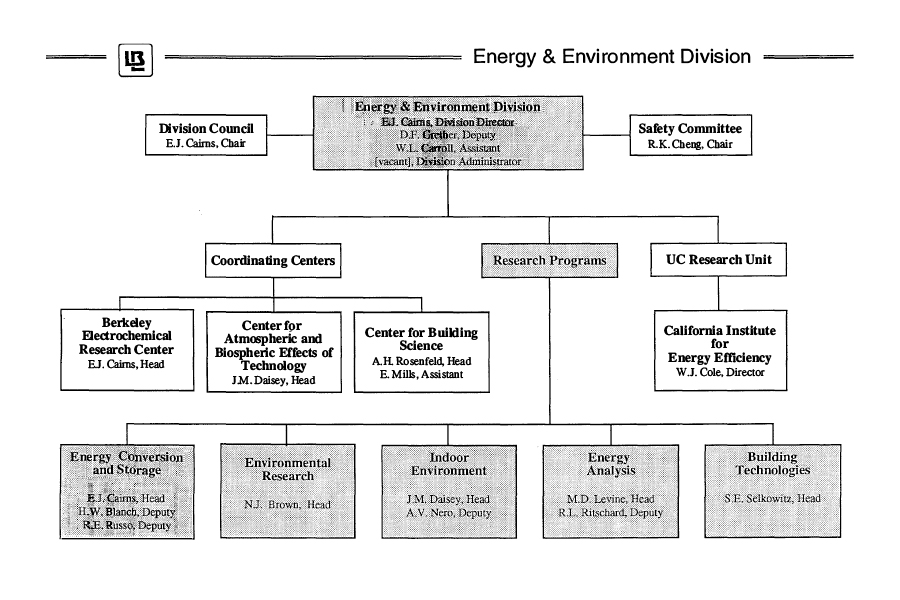 Steve Wiel is hired as the director of the Lab's planned Washington, DC, Project Office. Jeff Harris is the deputy director.

Turns out duct tape is least effective at sealing ducts; researchers replace it with a sealant that works, the Aeroseal system, eliciting significant savings in home and building heating and energy costs. 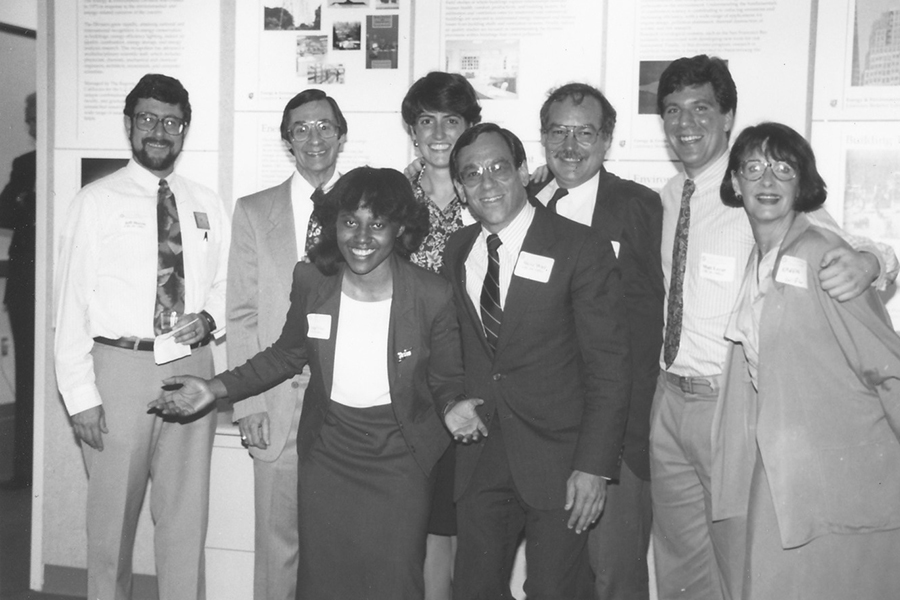 Syndee Brill is hired as division administrator after a year-long search.

Fall - Partnership for a New Generation of Vehicles is established

The Clinton administration establishes the Partnership for a New Generation of Vehicles with U.S. auto companies to develop a Taurus-size car that gets 80 mpg. The U.S. Advanced Battery Consortium continues, but is only one component of a larger effort. 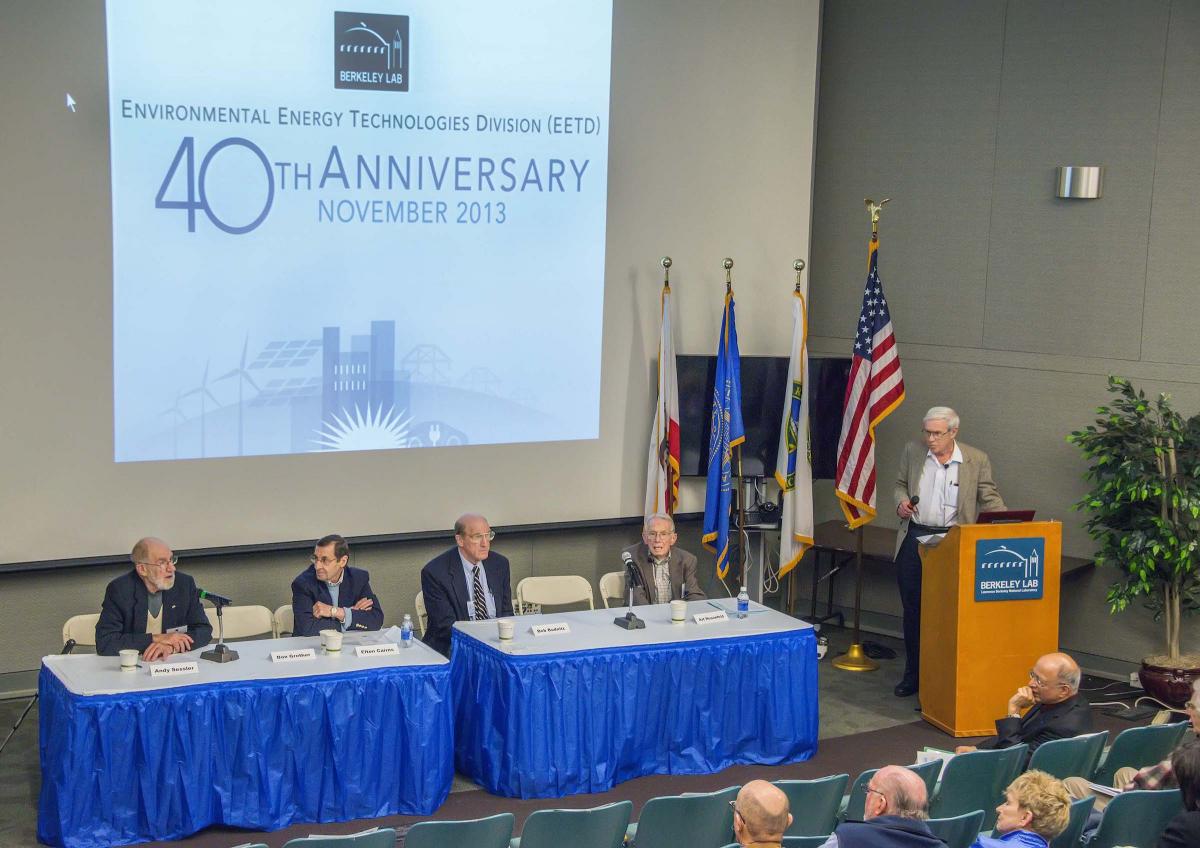 The fourth leadership retreat was held at the Vintage Inn in Yountville. The theme was "The Role of the Division in Growth Areas."

June - Syndee Brill is no longer the division administrator

Secretary of Energy Hazel O'Leary visits the Lab and has discussion with Ashok Gadgil about energy in India.

Rosenfeld retires from the University and the Laboratory, and becomes a senior advisor to U.S. Department of Energy assistant secretary for energy efficiency and renewable energy. Evan Mills is de facto acting Leader of the Center for Building Science.

Laboratory Directed Research and Development (LDRD) funding received for "Building Life-Cycle Information System," setting the stage for much of the future buildings research and development.

November (about) - Creation of Applications Team

The Center for Building Science announces the creation of Applications Team (A-Team) with Dale Sartor as the leader.

March -  First edition of "From Lab to the Marketplace"

First edition of  "From the Lab to the Marketplace." Prepared for the Galvin Task Force on Alternative Futures for U.S. Department of Energy national laboratories.

That year -  Steve Wiel moves from DC Office to Lab

Steve Wiel completes two-year commitment as head of the Washington, DC, office and moves to Berkeley. Dave Dragnich is hired as head of DC office.

Regents approve adding "National" to name of the Lab, as recommended by Director Shank. Preferred short version is Berkeley Lab.

Congress threatens drastic budget cuts in areas of interest to the division. President Clinton heads off the cuts.

The fifth leadership retreat is held at Lafayette Park Hotel, Lafayette. The theme is "Re-evaluating Our Strategic Directions."

May - Jeff Harris is leader of Energy and Environment Projects in Washington, DC

Last known edition of Energy and Environment newsletter that chronicled division activities and events potentially impacting the Division. Lila Schwartz had been the last of several editors. 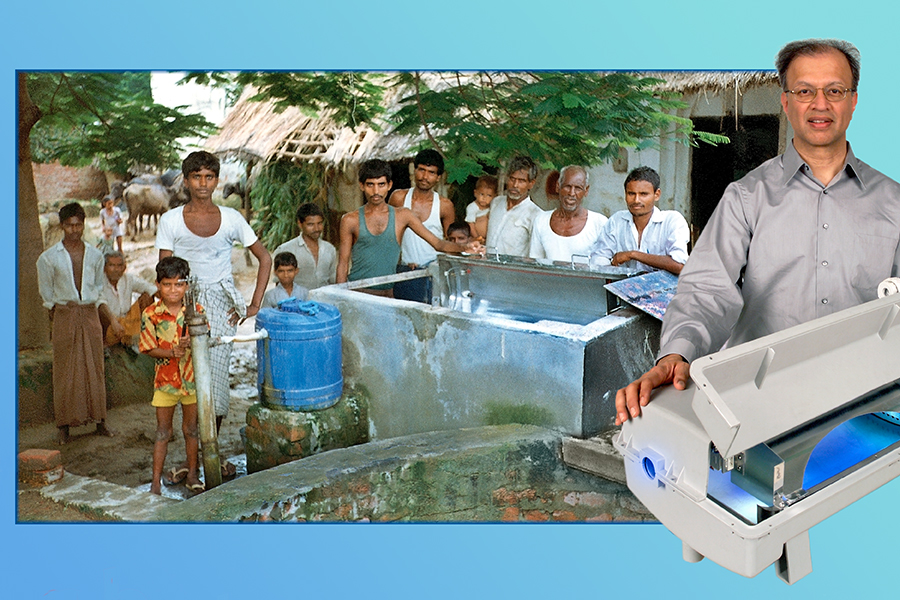 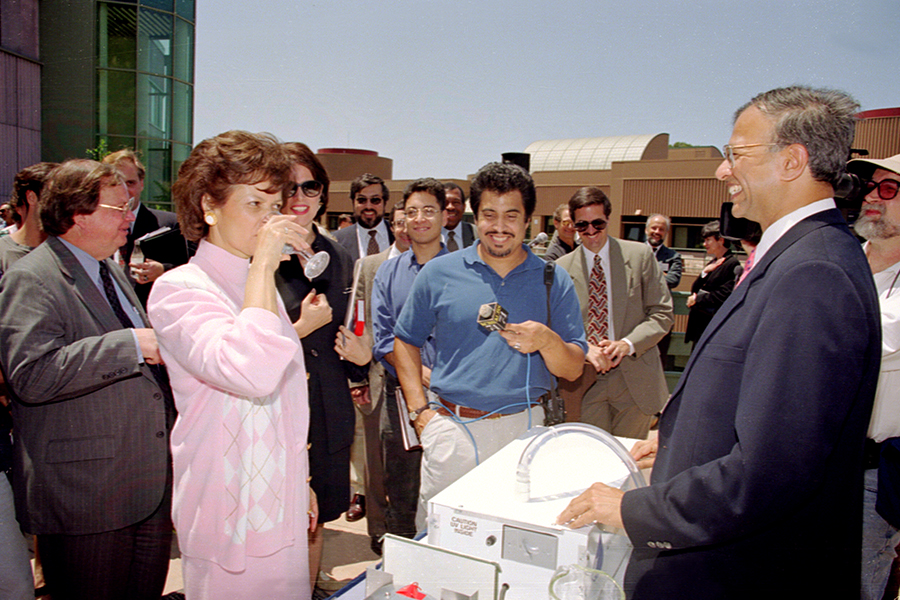 Secretary of Energy Hazel O'Leary visits Lab and honors Discovery Award winners Ashok Gadgil, Xiao-Dong Xiang, and Peter Schwartz. In the photos, Gadgil at a village where the purified water is used; O'Leary drinks water from UV Water Works at a Lab ceremony.

California legislature "restructures" the state's utilities (AB1890) and establishes the Public Interest Energy Research (PIER) Program. The California Institute for Energy and Environment (CIEE) nearly dies in the process as utilities stop funding it, but eventually CIEE it becomes involved with PIER and has a new life.

The National Energy Research Supercomputing Center moves from Lawrence Livermore National Laboratory to Berkeley Lab. Lab makes massive moves to provide space in the 50 complex. Energy and Environment gains office space in Building 70 for people with labs in that building and loses space on the second floor of Building 90 that it had just paid to have remodeled.

That fall - The Lab addresses its organization of environmental research

On the organization of environmental research at Berkeley Lab and the logic of the name change from Energy and Environment to Environmental Energy Technologies.

Rich Sextro replaces Bill Carroll as assistant division director, and has responsibilities for Environment, Health and Safety and Space.

Tenth and last Hollowell Lecture given by Cairns on "Adventures in Electrochemical Energy for Electric Vehicles." 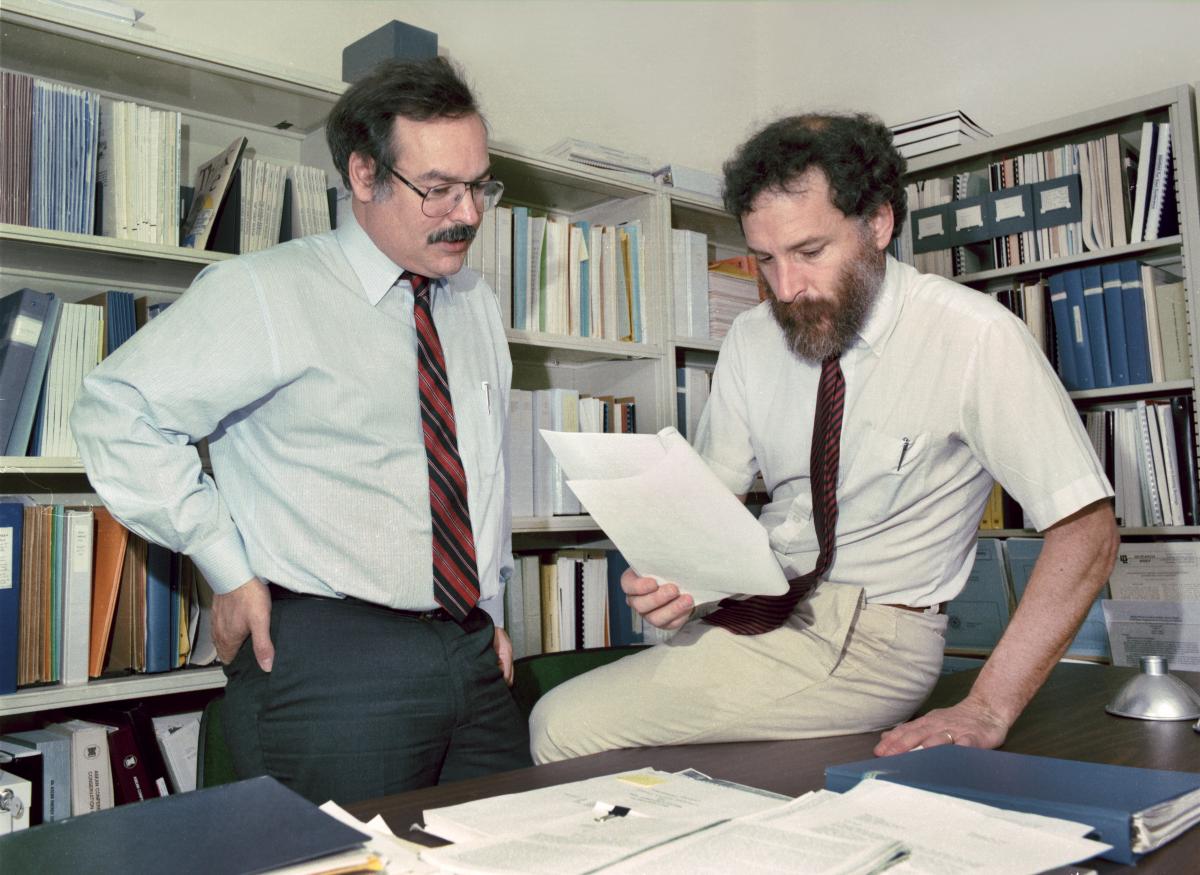 Levine is pictured at left with colleague Lee Schipper. Mark Levine reorganizes the division somewhat by establishing the Advanced Energy Technologies Department (Grether, head), which encompassed the groups in the former Energy Conversion and Storage Program and some research from the former Environmental Research Program. Other parts of that program moved to the new Atmospheric Sciences Program (Nancy Brown, head).

The California Energy Commission's Public Interest Energy Research Program will award up to $62M/year for four years for research and development.

Early in the year - Division's three centers are disbanded

March - Memorandum of understanding signed by the California Energy Commission and the U.S. Department of Energy to facilitate PIER funding

Recognizing the energy implications of China’s rapidly growing economy, the United States forges ties with the government of China to work on energy efficiency, focusing first on Chinese refrigerators, the largest refrigerator economy in the world.

First edition of Energy and Environment Division News, focusing on the division's research and development, is published for both internal and external audiences.