The 1970s were a decade of great expansion. Nationally, a host of new environmental laws had just been passed to protect the nation's air, water, and land. At Berkeley Lab, an environmental focus takes shape as well when then-director Edwin McMillan establishes the Environmental Program and the first environmental funding arrives for what would someday become the Energy Technologies Area.

Women's contributions became more visible: Barbara West became administrator for the Energy and Environment division; Nancy Brown was hired to the combustion group; and Helen Michel co-led research that revealed the famed Plate of Brass was a hoax. The 1970s were further defined by the oil crisis of 1973, which inspired Art Rosenfeld and other researchers in the Lab's Physics Division to take a critical look at energy efficiency and develop it into a credible scientific discipline. 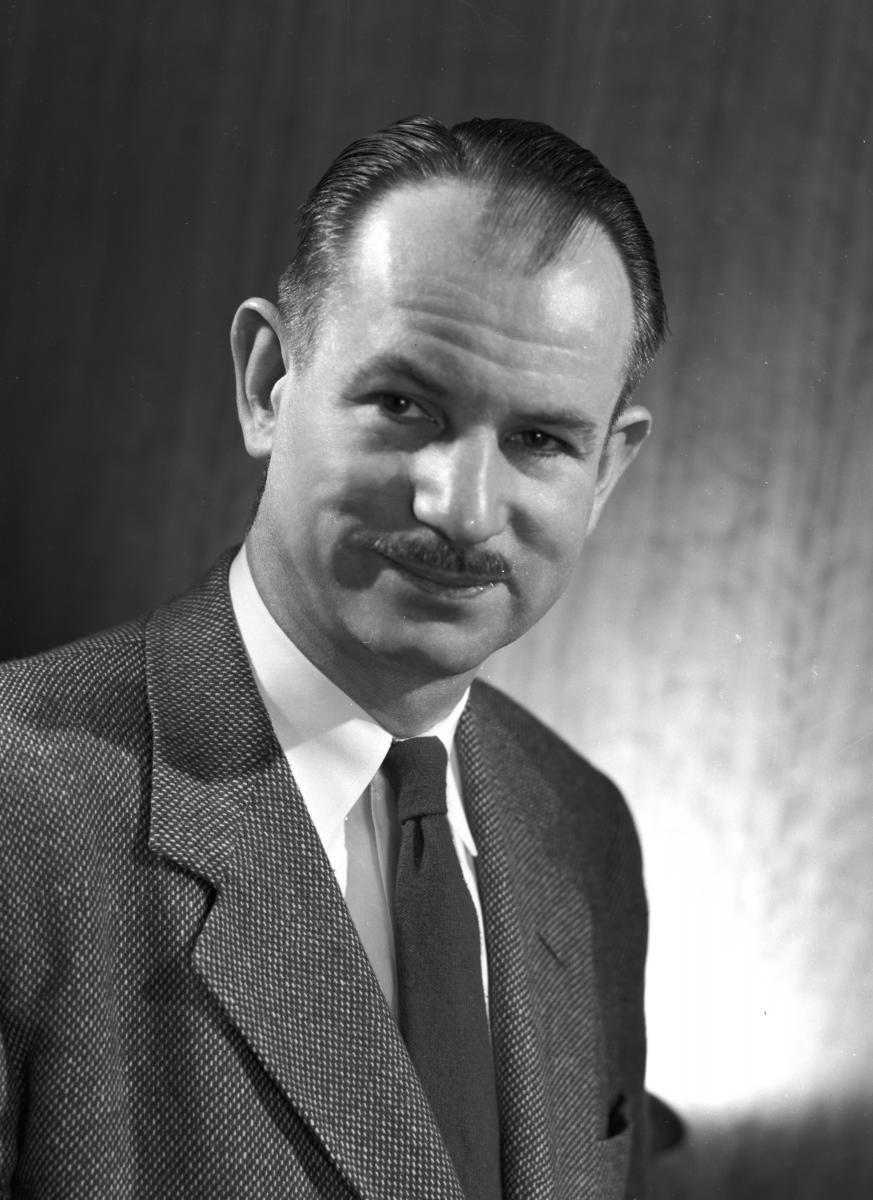 In 1970, Director Edwin McMillan founds the Environmental Program, with continued exploration of how Berkeley Lab can best assist with the "environmental problem."

Informal meeting on the possible role of Berkeley Lab in studying the environmental problem. The meeting included about 40 attendees, including Edwin McMillan, Andy Sessler, Jack Hollander, Will Siri and Art Rosenfeld. Ideas for environmental projects start flowing in to Sessler. 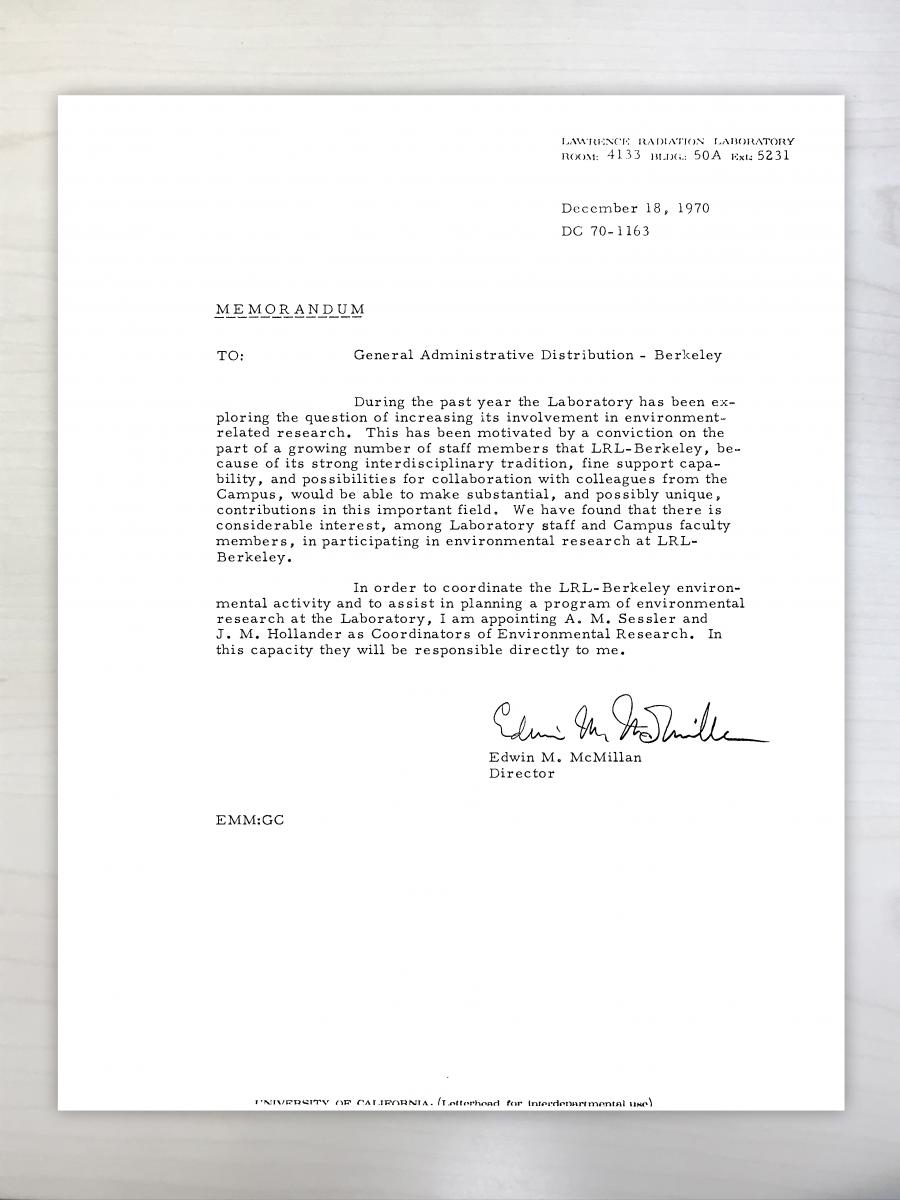 Environmental Research Program is started by Director McMillan, led by Sessler and Hollander.

The National Science Foundation launches the RANN (Research Applied to National Needs) program, for which U.S. DOE labs are eligible.

In 1971, the Lab is renamed Lawrence Berkeley Laboratory. 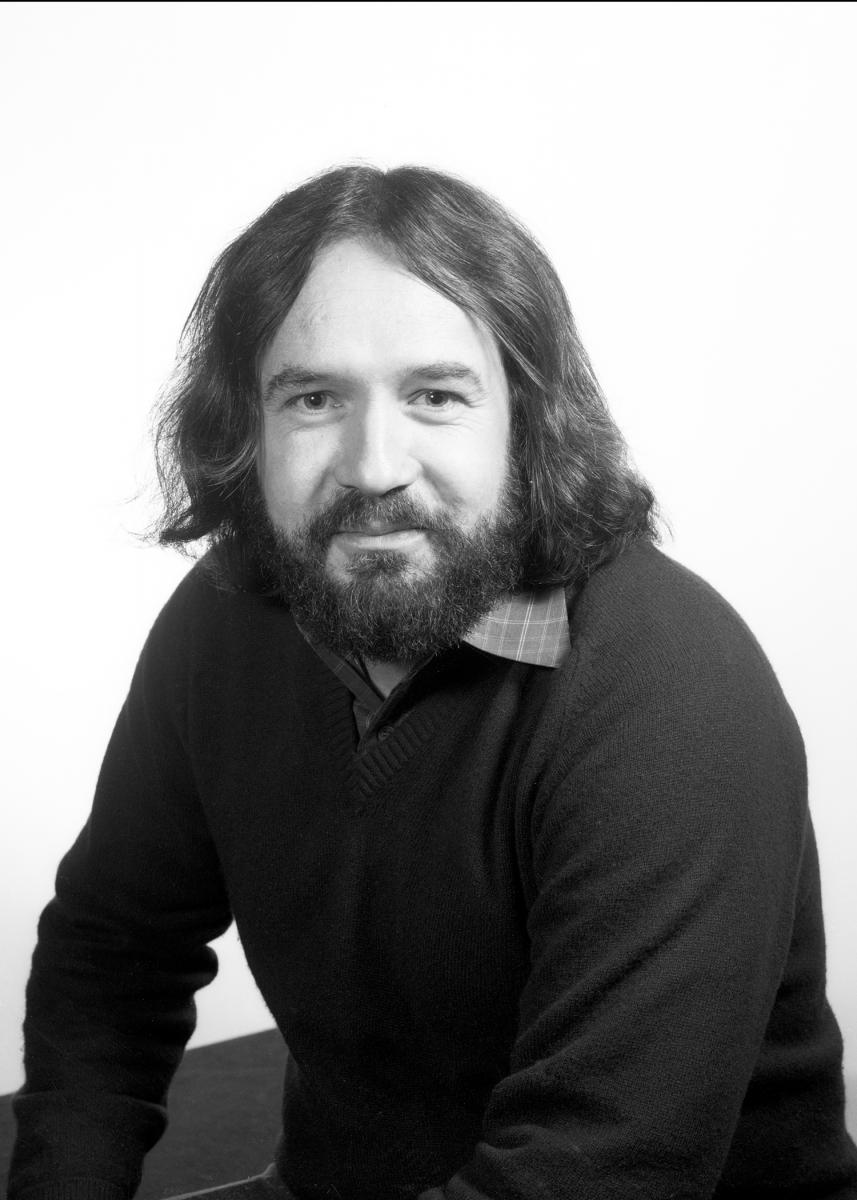 Throughout 1971 - University of California separates Berkeley and Livermore

Speech by California Lt. Governor Edwin Reinecke includes the energy crisis as one of many problems science can address.

In 1972, the "energy" research area joins the environmental focus at Berkeley Lab. 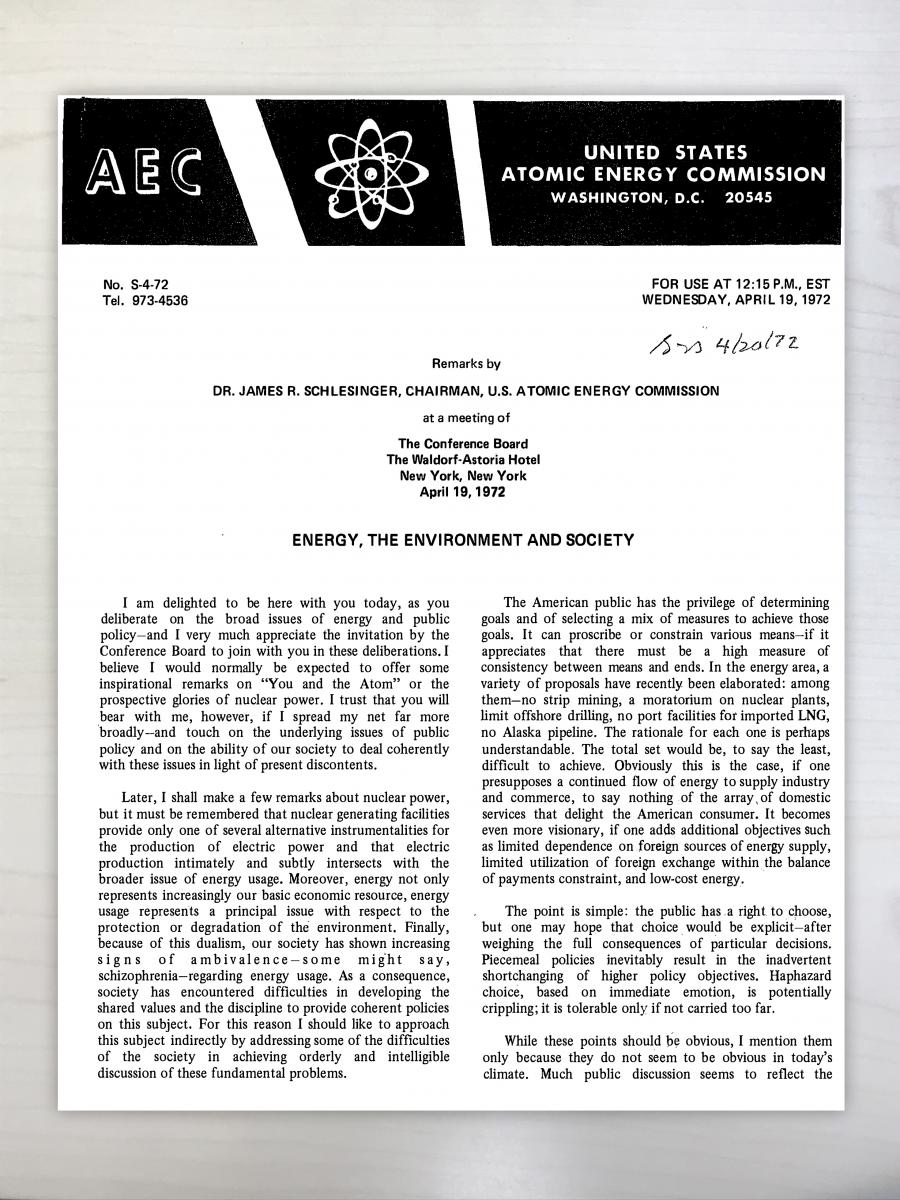 Chairman of the Atomic Energy Commission, James Schlesinger, gives a speech about the energy situation that has stood the test of time.

May 2 - Energy and Environment Program established

McMillan changes name of what will someday be the Energy Technologies Area to Energy and Environment Programs and appoints Hollander as assistant (Lab) director for the programs.

Glenn Seaborg publishes an editorial in Science magazine with the title "For a U.S. Energy Agency." He describes the then-situation with respect to energy—not that different from today—and proposes that the Atomic Energy Commission be transformed into the U.S. Energy Agency.

Hollander was the assistant (Lab) director for Energy and Environment Programs.  Although "survival" (of the program) is not that far off.

"Elements of a National Energy Policy" by Hollander and John Harte includes a section on modifying the demand for energy.

That year - Origins of the Solar Energy Program

During 1972, Mike Wahlig, formerly in the University of California's Physics Division, works towards developing a Solar Energy Program and recruits the Physics Division's Don Grether to help.

Researchers lay out a theoretical foundation for engineering design of electrochemical systems, including electrical energy storage, clarifying the physicochemical laws that govern the behavior of electrochemical systems and demonstrate how to use these laws to correctly formulate and solve problems associated with batteries, fuel cells, electrolyzers, and related technologies.

In 1973, Andy Sessler became Berkeley Lab’s third director just two weeks after the start of the 1973 oil embargo, when gas prices soared and lines at gas stations snaked for several blocks. The energy crisis had begun. On his first day in office, November 1, 1973, and with the support of the rapidly expanding growth of federal support for energy technology research and development, he established the Energy and Environment Division.

Sessler sends a memo to "The Staff of the Lab" reviewing the Lab's past successes and pointing to challenges that lie ahead.

Egypt and Syria attack Israel during Yom Kippur, which leads to the oil embargo and the first energy crisis.

The price of a barrel of oil has gone from $2/barrel to $6/barrel. Prepared by Sessler for Senator Alan Cranston.

Throughout 1973 - Fusion and geothermal programs move to Energy and Environment

Paul Witherspoon starts geothermal program in the Energy and Environment Division, which later led to the Earth Sciences Division.

In 1974,  the Atomic Energy Commission comes to an end, as such. American Physical Society summer study introduces the concept of energy "efficiency." 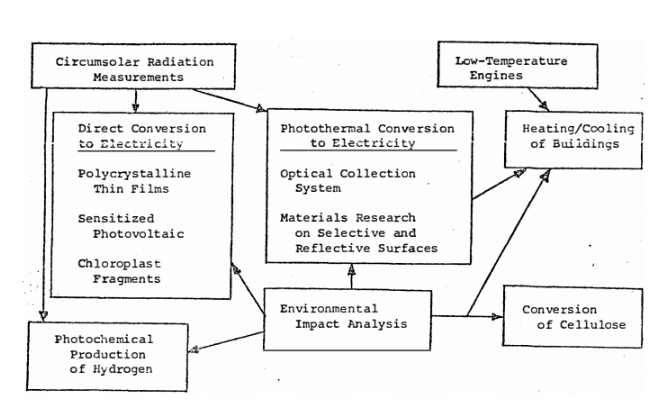 Pictured above: Projects in the Solar Program. More than 40 years later, the world is still working on many of the same technologies.

The first solar funding: The Circumsolar Telescope Project. Funding is from the National Science Foundation—RANN program. Don Grether transfers from Physics to the Energy and Environment Division.

Summer 1974 - Summer study on efficient use of energy

In 1975, energy analysis and buildings become a focus for Berkeley Lab.

Will Siri joins Energy and Environment as the Leader of the Energy Analysis Program.

That year - Rosenfeld and Berman move to Energy and Environment

Berkeley Summer Study attracts experts from around the country to engage with UC Berkeley and Berkeley Lab staff to formulate/prioritize needs/opportunities related to energy. Upon conclusion, Berkeley Lab was asked to to submit a proposal for follow-on work, which led to new funding in early 1976.  A “Proceedings” (14 papers) of the Berkeley Summer Study was published in the inaugural issue of the new journal Energy and Buildings, Vol 1, Issue 1 in May 1977.

Fall - Hollander steps down as Energy and Environment Head

Hollander steps down to lead a major National Academy of Science study: Committee on Nuclear and Alternative Energy Systems. Bob Budnitz is appointed acting head, Mel Simmons acting deputy head. The Energy and Environment office is located on the 4th floor of Building 50A.

In 1976, the United States celebrates its bicentennial, and the Carter era begins.

July 12 - Steve Selkowitz is hired for windows research and development

Steve Selkowitz, who had first engaged with Rosenfeld/Berman in the 1975 Summer Study and
helped write the followup proposal for additional funding, is hired to lead the advanced window development
effort, while Sam Berman focuses on advanced lighting. Rosenfeld develops Two-zone,
which becomes Cal-ERDA and then DOE-2 building energy simulation model.

That year - Barbara West is appointed Energy and Environment administrator

End of Year - Annual Report has articles on new areas

The Annual Report has first articles on buildings, combustion, and energy analysis. The division's staff numbers 180, not including graduate students.

1977 - Growth in energy research and development

The year 1977 was an era of even more growth in energy technology research and development. That year also heralded the advent of the U.S. Department of Energy and the downsizing of the Energy and Environment Division.

President Carter declares that the energy effort is the "moral equivalent of war" and launches a large program "to give us energy security," including the solar demonstration program and the Synfuels Corporation.

May - Energy modes: complacency and panic

With respect to energy, "We have only two modes: complacency and panic," James Schlesinger said in The New York Times.

President Carter establishes the U.S. Department of Energy, which takes over the responsibilities of Energy Research and Development Administration and other energy-related federal agencies.

Energy and Environment and University of California-Berkeley Energy and Resources Group hold a symposium on "First Impressions of Carter's Energy Policies."

Fall - Plate of Brass is a hoax

Energy and Environment's Frank Asaro and Helen Michel use Neutron Activation Analysis to prove that the plate of brass supposedly left at Point Reyes by Sir Francis Drake is a hoax.

That year - Hollander returns, but to campus

Jack Hollander returns to Berkeley, but to U.C.-Berkeley (not Berkeley Lab), and founds the University-wide Energy Research Group, which later became the University of California Energy Institute.

That year - Energy and Environment is downsized

The Earth Sciences Division split off from Energy and Environment. Fusion goes to the Accelerator Division, which is renamed the Accelerator and Fusion Research Division. The BART project goes to Engineering.

Mark Levine is hired to join the Energy Analysis Program.

That Year - First external review of Energy and Environment

End of Year - Programs in the Energy and Environment Division

The division has been downsized from nine to five programs: Chemical Process Research and Development, Energy Analysis, Energy Efficient Buildings, and Solar Energy. Staff decreases from 180 to 120.

In 1978, Energy and Environment welcomes Elton Cairns as head of the division.

The Windows and Daylighting Group builds it first window testing facility in
Wurster Hall on campus, home of the UC Department of Architecture, to encourage more
interaction between the architectural professional and the growing building science group at
Berkeley Lab. Eventually, the thermal test facility was moved up the Hill to Berkeley Lab. An “artificial sky”
24’ diameter domed structure was built and operated until xx for daylighting research and
design studies. The building was eventually dismantled.

The U.S. Department of Energy funds Energy and Environment (Charlie Case) to support Appropriate Energy Technologies in Arizona, Nevada, and Pacific Territories (islands). California and Hawaii were handled by other institutions. The largest grant was $49,000 for an "Agua-Power Barge." The smallest was $328.00 for a solar beeswax melter. 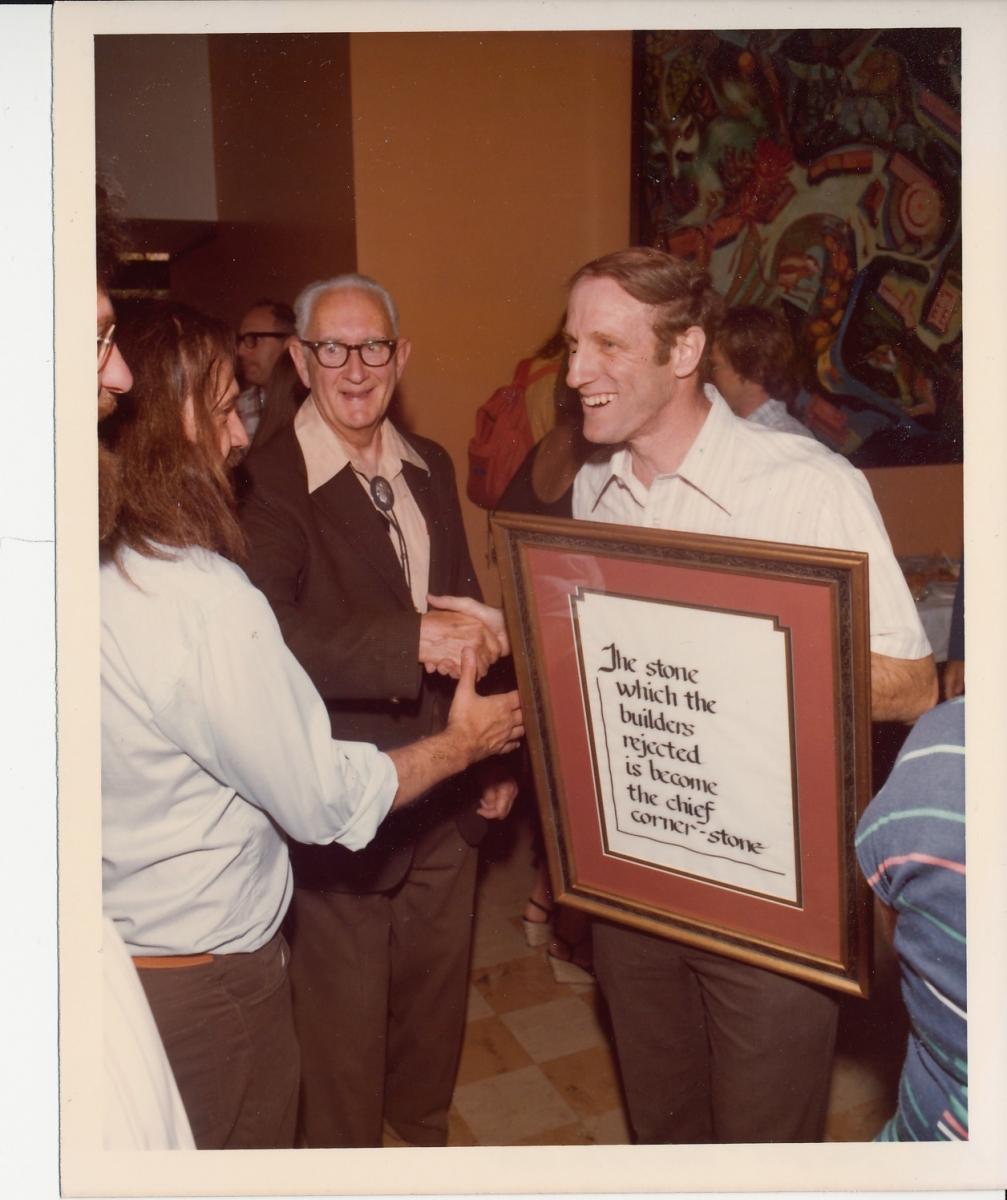 Farewell party for Budnitz. In the photo at left, Budnitz is holding a plaque, and Craig Hollowell is shaking his hand.

That year - Much of Energy and Environment moves to Building 90

The Division Office and much of the Division's staff move from the 50 complex to Building 90.