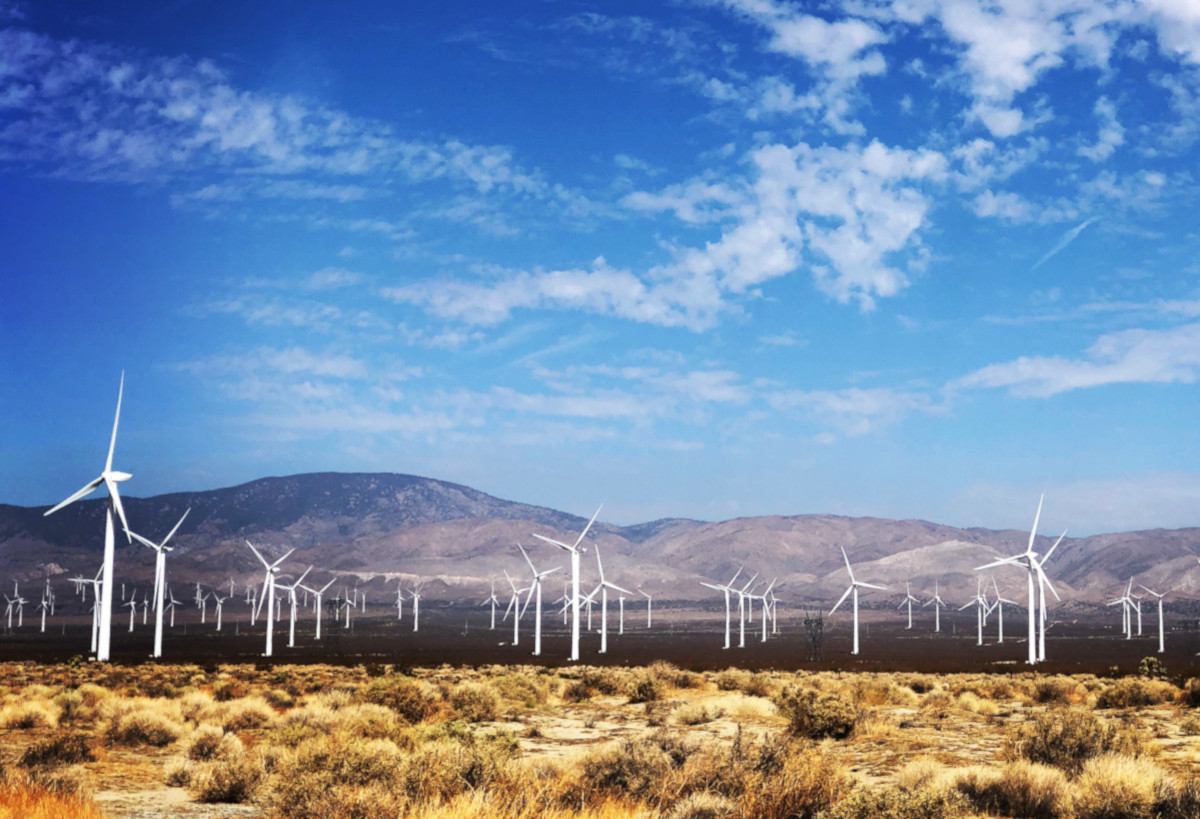 Wind energy continues to see strong growth, solid performance, and attractive prices in the U.S., according to a report released by the U.S. Department of Energy (DOE) and prepared by Lawrence Berkeley National Laboratory (Berkeley Lab). With levelized costs of just over $30 per megawatt-hour (MWh) for newly built projects, the cost of wind is well below its grid-system, health, and climate benefits. 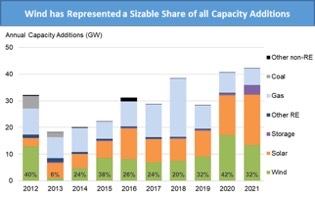 • Wind comprises a growing share of electricity supply. U.S. wind power capacity grew at a strong pace in 2021, with 13.4 gigawatts (GW) of new capacity added representing a $20 billion investment and 32% of all U.S. capacity additions. Wind energy output rose to account for more than 9% of the entire nation’s electricity supply. At least 247 GW of wind are seeking access to the transmission system; 77 GW of this capacity are offshore wind, and 19 GW are hybrid plants that pair wind with energy storage or solar.

• Turbines continue to get larger. Improved plant performance has been driven by larger turbines mounted on taller towers and featuring longer blades. In 2011, no turbines employed blades that were 115 meters in diameter or larger, but in 2021, 89% of newly installed turbines featured such rotors. Proposed projects indicate that total turbine height will continue to rise. 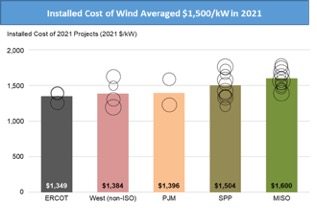 • Low wind turbine pricing has pushed down installed project costs over the last decade. Wind turbine prices averaged $800 to $950/kilowatt (kW) in 2021, a 5% to 10% increase from the prior year but substantially lower than in 2010. The average installed cost of wind projects in 2021 was $1,500/kW, down more than 40% since the peak in 2010, though stable in recent years. The lowest costs were found in Texas.

• Wind energy prices have risen, but remain low, around $20/MWh in the interior “wind belt” of the country. After topping out at $75/MWh for power purchase agreements executed in 2009, the national average price of wind has dropped – though supply-chain pressures have resulted in increased prices in recent years. In the interior “wind belt” of the country, recent pricing is around $20/MWh. In the West and East, prices tend to average above $30/MWh. These prices, which are possible in part due to federal tax support, fall below the projected future fuel costs of gas-fired generation. 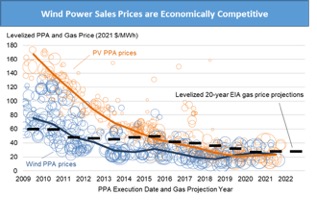 • Wind prices are often attractive compared to wind’s grid-system market value. The value of wind energy sold in wholesale power markets is affected by the location of wind plants, their hourly output profiles, and how those characteristics correlate with real-time electricity prices and capacity markets. The market value of wind increased in 2021 and varied regionally from below $20/MWh to over $40/MWh, a range roughly consistent with recent wind energy prices.

• The average levelized cost of wind energy was $32/MWh for plants built in 2021. Levelized costs vary across time and geography, but the national average stood at $32/MWh in 2021 – down substantially historically, though consistent with the previous three years. (Cost estimates do not count the effect of federal tax incentives for wind.) 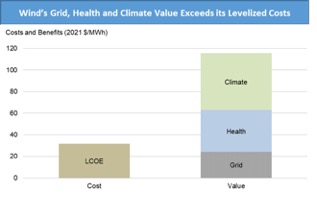 • The health and climate benefits of wind in 2021 were larger than its grid-system value, and the combination of all three far exceeds the current levelized cost of wind. Wind generation reduces power-sector emissions of carbon dioxide, nitrogen oxides, and sulfur dioxide. These reductions, in turn, provide public health and climate benefits that vary regionally, but together are economically valued at an average of over $90/MWh-wind for plants built in 2021.

Berkeley Lab’s contributions to this report were funded by the U.S. Department of Energy’s Wind Energy Technologies Office.

Additional Information:
The full Land-Based Wind Market Report: 2022 Edition, a presentation slide deck that summarizes the report, several interactive data visualizations, and an Excel workbook that contains the data presented in the report, can be downloaded from windreport.lbl.gov. Companion reports on offshore wind and distributed wind are also available from the Department of Energy.

The U.S. Department of Energy’s release on this study is available at energy.gov/windreport.

This article originally appeared at the Berkeley Lab News Center.