The 1980s saw big changes at the Applied Sciences Division, (Energy & Environment name chnaged in 1983), the laboratory as a whole, and the nation.

David Shirley was appointed as Lab Director—the first chemist to direct Berkeley Lab. Shirley’s first success came in 1982 when the U.S. Department of Energy approved an initiative called the Center for Advanced Materials. This research was aimed at solving "stopper problems" in materials science that were blocking technological developments.

The Applied Science division contributed to astroid impact theory, helped to found the American Council for an Energy Efficient Economy, and then faced significant budget cuts throughout the decade as the Reagan administration dismantled many environmental programs.

Expand/Collapse All
1980 - Changes from division on up

Rosenfeld, Jack Hollander, among others found the American Council for an Energy Efficient Economy

That year and Beyond David Shirley is named director of the Lab, the first time a chemist rather than a physicist was chosen to be director.

June 6 - Asteroid impact theory of the extinction of dinosaurs published 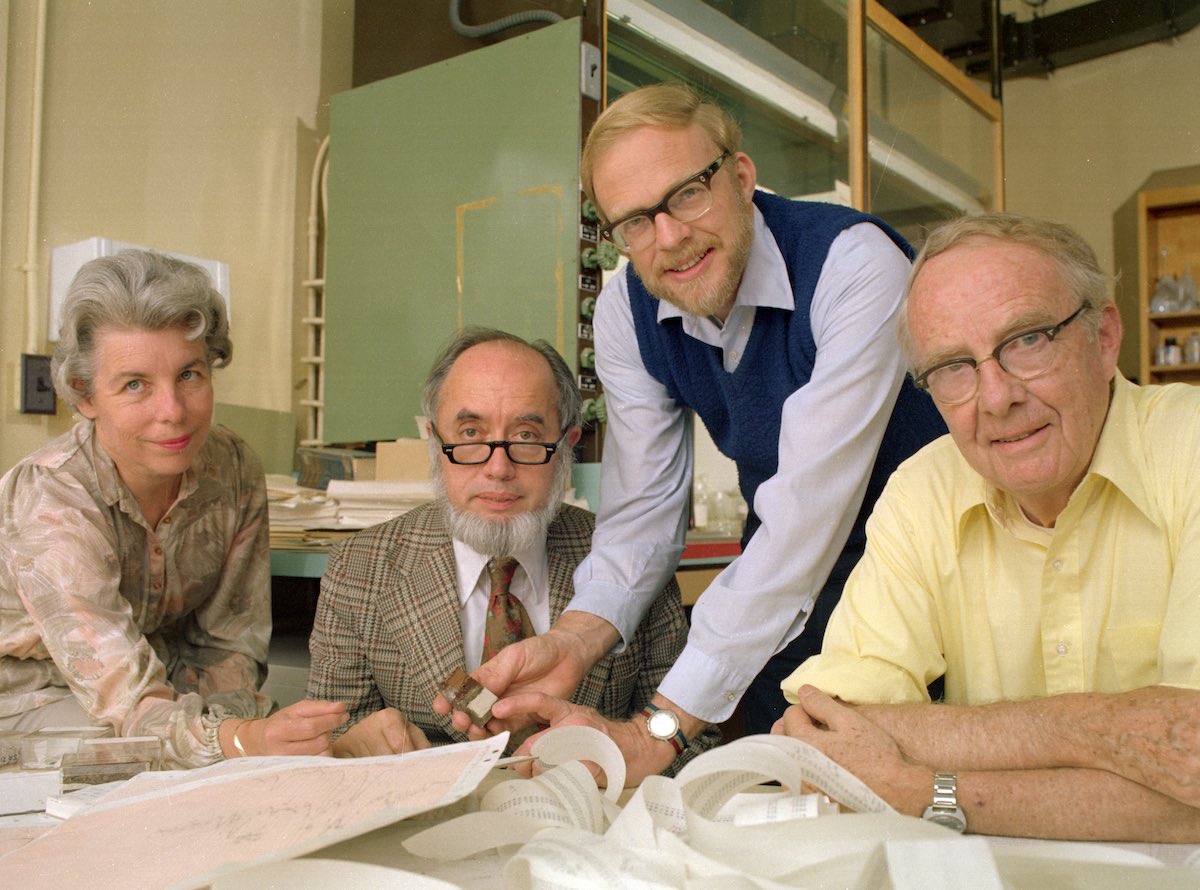 University of California-Berkeley and Berkeley Lab physicist Luis Alvarez; Luis' son Walter, a University of California-Berkeley geologist; and Energy and Environment's Frank Asaro and Helen Michel publish the asteroid impact theory of the extinction of dinosaurs 65 million years ago. Michel is pictured, at left, in 1969 with Asaro, Walter Alvarez, and Luis Alvarez (l-r).

First American Council for an Energy Efficient Economy summer study on buildings, indicating a growing awareness and focus on energy efficiency in buildings.

Barbara West steps down as as administrator of the Energy and Environment Division.

Ronald Reagan is elected president, with campaign vows to eliminate the U.S. Department of Energy.

The aethalometer, which measures the vertical distribution of soot particles produced by coal and oil combustion in the atmosphere, is created. The device reveals layers of soot above the arctic ice cap in concentrations comparable to those above urban areas.

The first known edition of the Energy and Environment Newsletter was published, chronicling division activities and related events.

End of Year - Energy and Environment Division growing in size

The Lawrence Berkeley Laboratory annual report shows that the Energy and Environment Division has 489 staff, not including the division office.

Reagan begins to dismantle the energy programs that Carter had built up with the emphasis now on high-risk, high-payoff research.

January 23 - James Edwards to "extract" the U.S. Department of Energy

James Edwards, a dentist, is appointed U.S. Secretary of Energy with the mandate to "extract" the Department of Energy from federal government.

That year - Most solar projects terminated

Most solar energy projects lose funding and are terminated.

Don Grether is appointed deputy division head of the Energy and Environment Division. Will Siri retires as leader of the Energy Analysis program. Mark Levine is appointed as the acting leader.

Three historians describe the Lab's first 50 years: Lawrence and His Laboratory. Grether's commentary on the book gives the big picture for the first 50 years.

February - Work starts on the Energy and Environment strategic plan

A memo from Elton Cairns launches the effort to develop the division's first strategic plan. Elton Cairns establishes the Craig Hollowell Lecture Series. As originally envisioned, the lectures would be given by division scientists.

Mike Rothkopf is hired as the leader of the Energy Analysis Program after a national search.

End of Year - division staff down by about 100

Annual report shows that the division has 398 staff including the division office. A loss of about 100 from 1980.

Researchers identify the risks of radon, a radioactive gas that can seep into homes from the soil. Meanwhile, selenium contamination from irrigation drainage is identified as the reason wild birds are being poisoned to death at the Kesterson Reservoir in the San Joaquin Valley.

Via a revised memo, Elton Cairns extends the Craig Hollowell Lecture Series to those outside the division. In practice, the lectures were alternatively given by inside and outside speakers.

The first Hollowell Lecture was given by Jan A. J. Stolwijk, Yale, on "Indoor Air Pollution: Exposure and Health Effects."

The division celebrates its 10th anniversary with a reception in the Cafeteria. Speakers included Ed McMillan, Jack Hollander, Will Siri, Rosenfeld, David Shirley, and Elton Cairns. 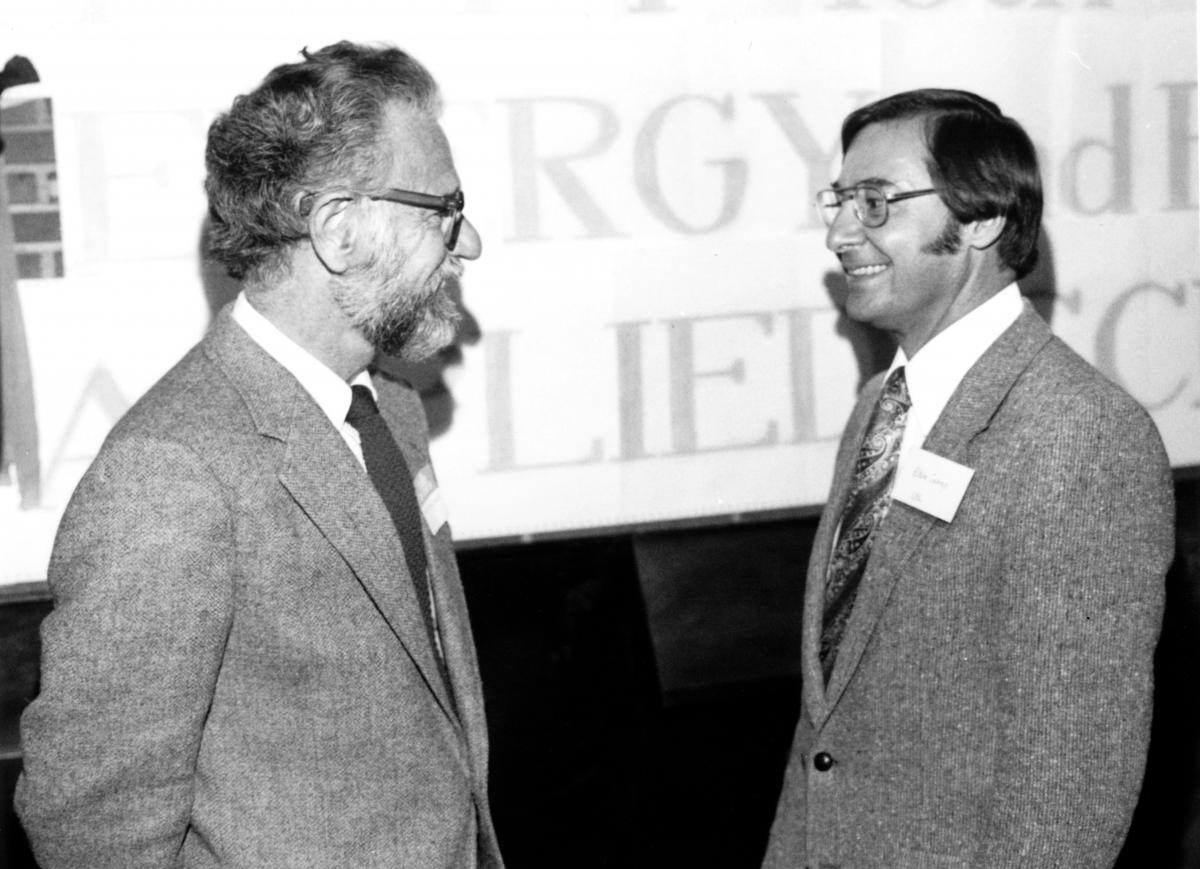 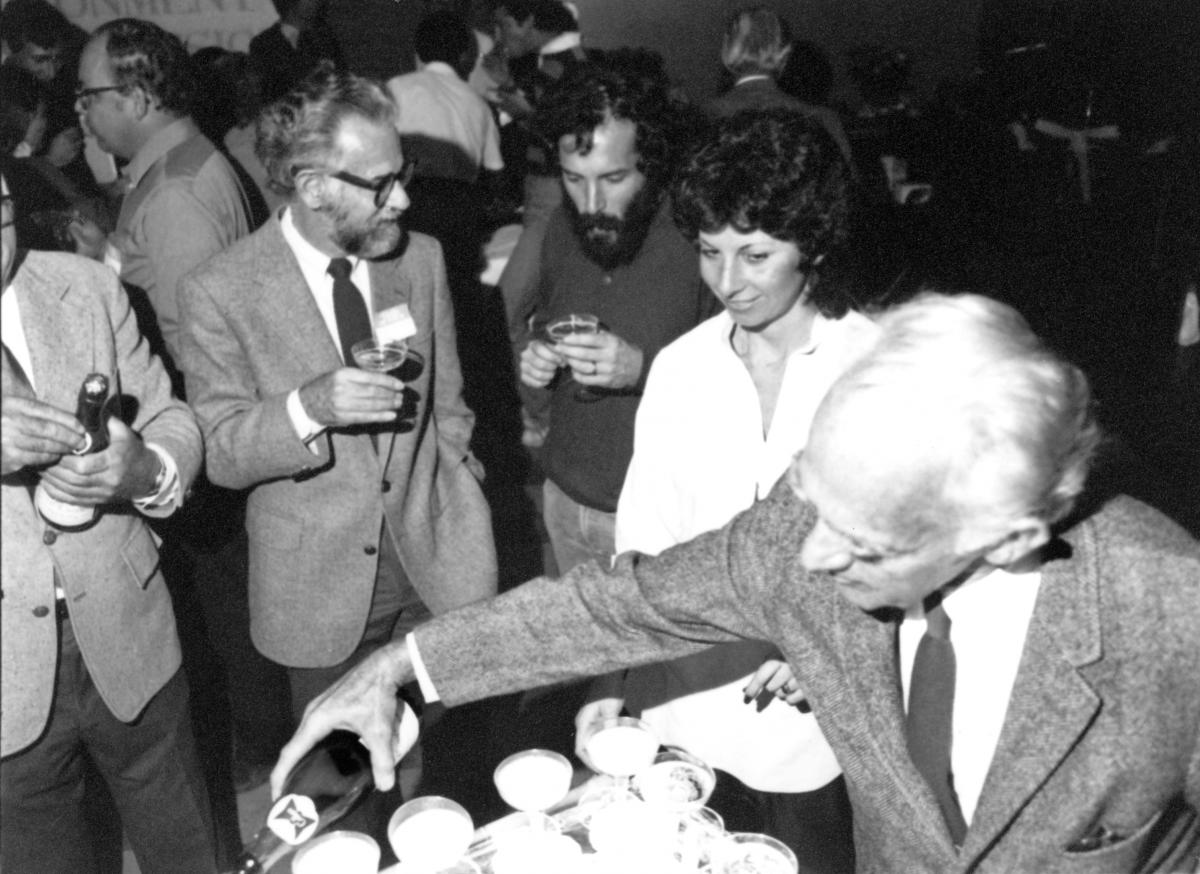 Orwell novel 1984 does not come true. Apple Macintosh is introduced during the Super Bowl.

Rosenfeld kicks off research on the benefits of cool roofs for energy savings and reducing summer urban temperatures, ultimately proving enormous benefits and inspiring guidelines for city planners and policymakers.

Don Grether's memo to Director Shirley states that the Applied Science Division has 60 term appointees. The large number was due to severe budget uncertainties in earlier years.

Early - Mark Alper leaves for the Center for Advanced Materials

Mark Alper leaves for a comparable division administrator position in the new Center for Advanced Materials.

First retreat of the senior leadership of the division is held at H's Lordships. The major topics were organization, new research directions, and recognition of scientists.

A draft of the professional staff procedures document is developed. This document supersedes earlier documents on this subject.

May - Advisory committee on organization reports out

Dave Emery leaves to take a position in a private sector company in Colorado.

Cairns sends a memo outlining proposed re-organization. He retains line management structure with program leaders reporting to division head, but proposes changes in the mix of programs. Also proposed are the Center for Building Science and the Center for Atmospheric and Biospheric Effects of Combustion.

1986 - Division is reorganized and federal funding for energy efficiency plunges The Center for Building Sciences coordinates research across the four buildings-related member programs. The leaders, plus Rosenfeld, Grether, and Mike  Rothkopf, constitute the Center Executive Committee.

A major Center for Building Sciences activity is to establish the California Institute for Energy
Efficiency, recognizing the scope and importance of the state’s energy efficiency policies and
programs, and providing potential complementary financial support to DOE-funded programs.
Regular participants on the organizing committee are Rosenfeld, Jeff Harris, Levine,
Grether, Carl Blumstein, and Charles Hitch (former University of California President).

The retreat was held at St. Mary's College in Moraga. Theme was "Future Directions of the Division."

August - U.S. Department of Energy endorsement of the California Institute for Energy Efficiency

A letter to Rosenfeld from Alan Streb, Deputy Assistant Secretary for Conservation and Renewable Energy, is taken as an endorsement of the concept by the U.S. Department of Energy.

End of Year - Division down to 383 staff

The center executive committee reviews the Center for Building Sciences and gives high marks in difficult financial times for several of the member programs. Unexpected cuts by Congress in the energy efficiency budget made 1986 bad and 1987 is worse.

Lab is reorganized with the introduction of associate laboratory directors for the research divisions. 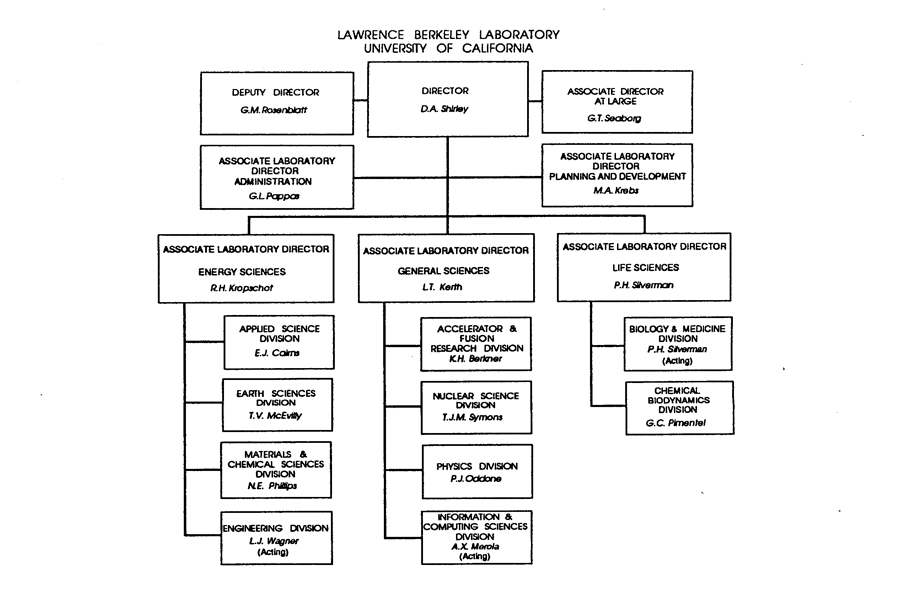 End of Year - Division staff down to 340

1988 - Start of the California Institute of Energy Efficiency era

The China Energy Group is formed, kicking off an international effort to share energy-efficiency research with other countries. The effort soon spreads to other nations, including India, and eventually results in creation of the International Energy Analysis Department.

The "Rosenfeld Effect" is unveiled at the 1988 American Council for an Energy Efficient Economy Summer Study.

Waxahachie, Texas, is selected as site for the Superconducting Super Collider, and its central design group soon thereafter moves to Texas. The Energy Analysis Program takes over the 4th floor of Building 90. 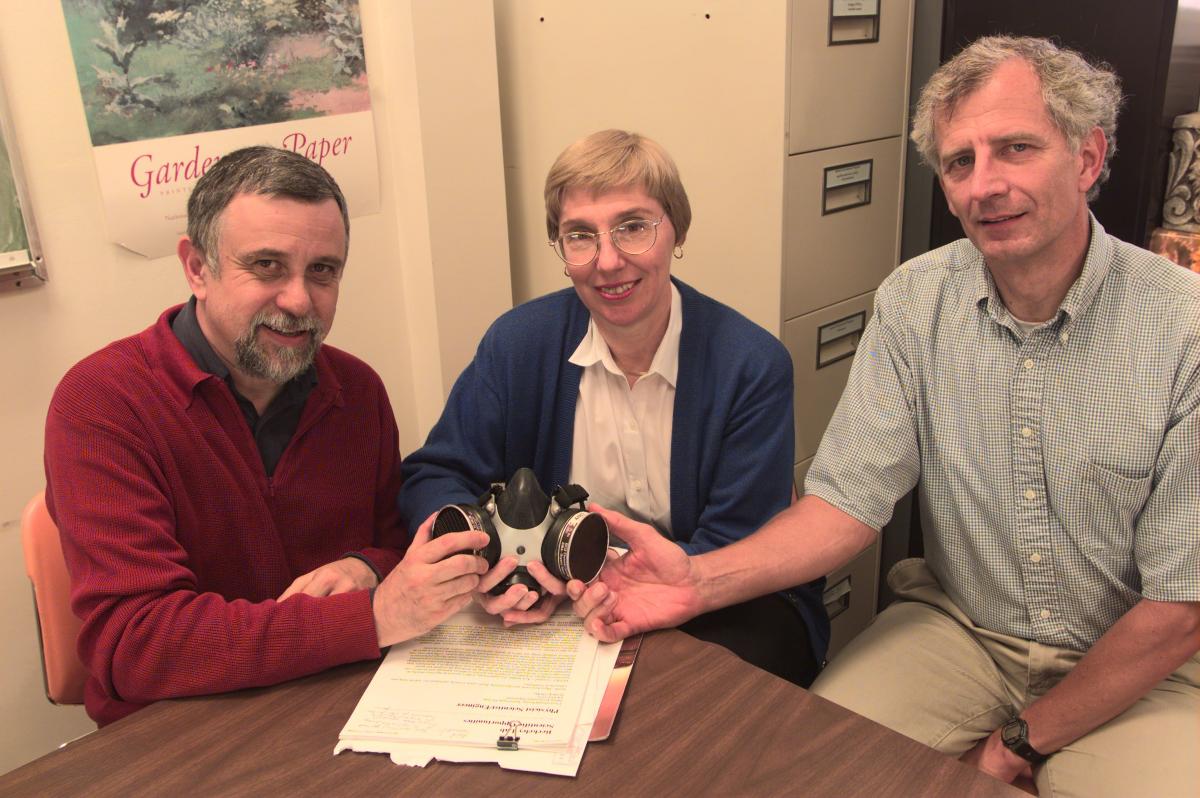 Daisey is appointed leader of the Indoor Environment Program, replacing Dave Grimsrud, who left the Lab.

1989 is a period of relative stability and some growth in energy technology research and development.

J. Michael Davis is confirmed as U.S. Department of Energy Assistant Secretary for Conservation and Renewable Energy, leading to a near disaster for the division in that he proposed to fund only four core Labs (not including Berkeley Lab). Some behind-the-scenes political actions squelched the proposal.

The Bush administration establishes the U.S. Advanced Battery Consortium in conjunction with the U.S. auto companies and the Electric Power Research Institute. The expectation was that electric vehicles would replace conventional vehicles. 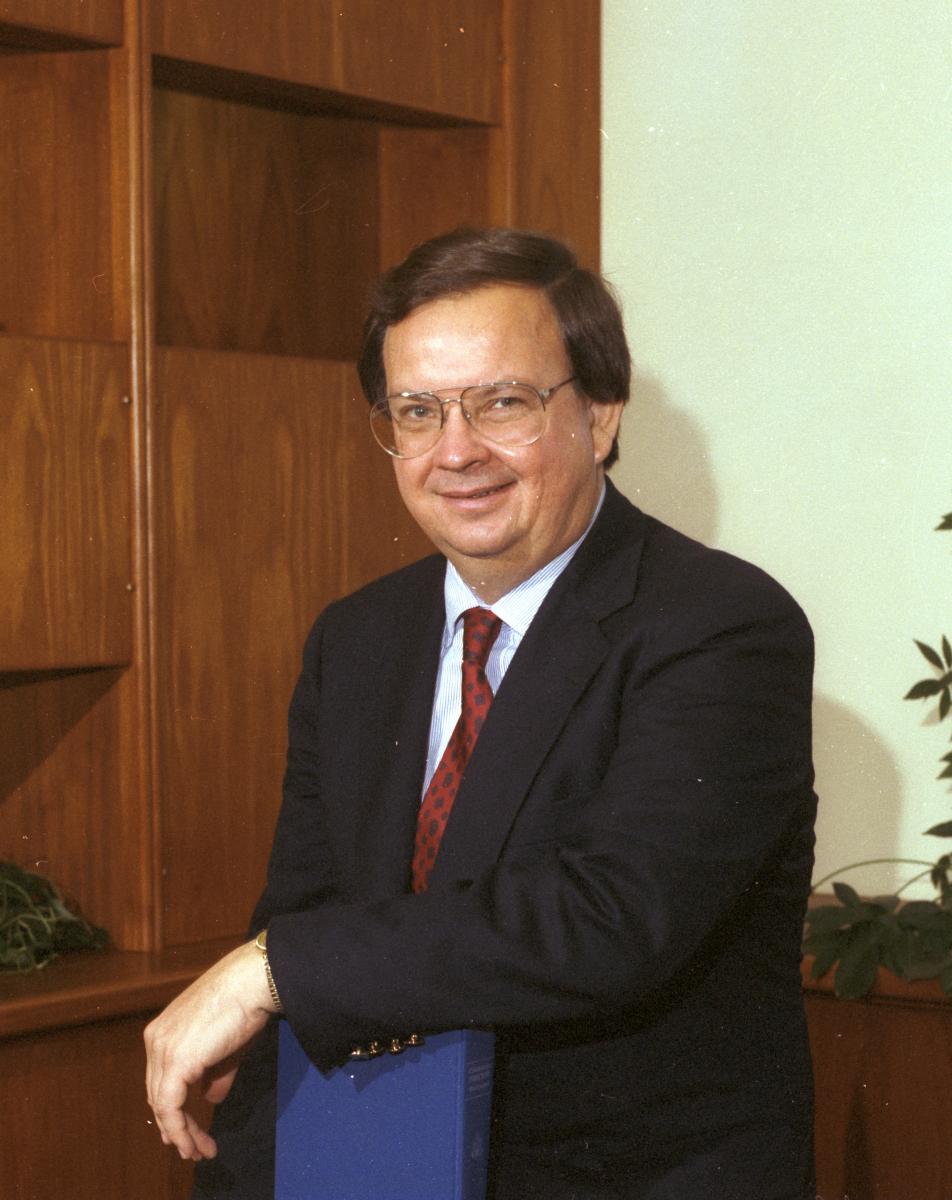